There are moments in life we never forget, those times we use as checkpoints when looking at the past. These can range in size from huge, epic act breaks, to small, seemingly mundane plot points. As we reach back into that nebulous thing we all have called memory, we often compare when things happened to these benchmarks. “We bought the car after mom died,” for example. Or, “The last time I had poison ivy, we played that game of Scrabble where so-and-so played 'quizzical' for umpteen points.”

What does this, you wonder, have to do with music?

Well, nothing, really. It's just that I'm about to describe one of those small, seemingly mundane plot points.

When I was a student at Boston University (According to one of my professors, for me “being a student [was] an extra-curricular activity.”), I had the good fortune to sing Benjamin Britten's War Requiem in the school's Symphonic Chorus. One day, rehearsing part of the dies irae section, I happened to be sitting next to Bob Mollicone, an incredibly excellent musician. He was singing second tenor, and I was singing first. It was early on in the rehearsal process, so we were pretty much sight-reading. We got to the end of the section where the tenors sing “Oro supplex et acclinis quasi cinis,” which Britten had decided to score in parallel major seconds. Like this: 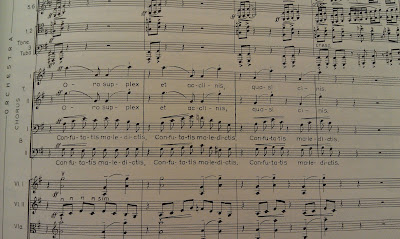 When the music stopped, Bob and I looked at each other and burst out laughing. Our conductor, the great Dr. Ann Howard Jones, looked over at us in her Iowan, no-nonsense way. She had a great sense of humor, but always liked to keep rehearsal moving. (This insistent decorum was nearly undermined when the Boston Red Sox were in the World Series where they finally “reversed the curse.” She tasked certain members of the chorus to wear radios and raise their hands when something important happened, or give hand signal score updates.)

“Is everything all right over there?” she said.

“Yes. Sorry,” I replied, then added something like “The parallel major seconds... It's just funny.”

She moved on quickly, but it did make me wonder. What makes music funny? Obviously, music with funny words is usually regarded as funny, but what about music without words, or where the words are serious? Why did this passage in a sober work like the War Requiem give Bob and me the giggles?

Around the same time, I composed my first rag. It actually took me almost a year to finish, and when I did, I wondered if it wasn't just ripped from my father's rags. (He has written a number of rags that, to my knowledge, have never been recorded or published, including a humorous one about past presidential hopeful Hubert H. Humphrey.) Before I started writing it, I knew I would name it “The Rich 4 Rag,” after my residence hall and floor. It's a jolly piece, as rags are.

I should say, for the uninitiated and the curious, that ragtime was a music form popular at the turn of the twentieth century. Its most popular composer was Scott Joplin, who standardized the form and also wrote waltzes, marches, and songs. The usual rag form is AABBACCDD, with an optional introduction at the beginning and optional interlude (usually four bars) between the third A and the first C, but there is much flexibility from piece to piece. Joplin's rags include “The Maple Leaf Rag,” “The Entertainer,” and “Elite Syncopations.”

With “The Rich 4 Rag,” I wasn't necessarily searching for the kind of musical humor that had Bob and me rolling over the Britten. I was just trying to prove that I could write in form, much like a poet might try penning a sonnet, or a filmmaker might try using film (odd, that). When it was finally done and I played it through for some friends, I was surprised to find they all laughed together at a certain chord in the minor key section. It went against everything I expected. Minor keys are usually associated with anything but laughter (although seeing Urinetown changed my perspective on this; the show is filled with minor key songs, yet it is absurdly hilarious).

Perhaps it is absurdity that is the humor of music. Thinking back to Britten's parallel major seconds for a second, I am reminded of the joke my father would play when coming to a new house to teach piano. I'm sure it's an old joke; it seems like the kind of thing Mozart would do to torment his patrons. The owner would almost always make a comment about how well-tuned (or, usually, not) it was—I thought the joke was especially funny if the piano had been tuned recently. My father would say, “Well, let's see,” and proceed to play a C major scale in one hand and a C-sharp major scale in the other. “Sounds pretty good!” he'd say, grinning, as his new young student gripped his ears and howled with laughter. In case you're wondering, it sounds like this:

In this case, the player's words and actions help the humor. Consider, in macrocosm, the work of such musical humorists as Victor Borge and Peter Schickele (and his alter-ego P.D.Q. Bach). Prof. Schickele uses two kinds of musical humor, the “accidental” (not truly accidental, as the humor here is planned, just made to seem accidental) and the intentional. They are both, in their own ways, absurd. In P.D.Q. Bach's “Art of the Ground Round” (a play on J.S. Bach's work about fugues), accidental humor is achieved when two singers, involved in a seemingly innocuous dramatic scene, end up overlapping lines to produce the phrase “Look up her dress.” Others of his work, the more “intentionally” funny bits, include pieces like Eine Kleine Nichtmusik (a play on Mozart's Eine Kleine Nachtmusik, or “A Little Night Music”—P.D.Q.'s piece means “A Little Not Music”), where the melody is besot with references to a vast number of other pieces, including Sousa marches, mariachi music, and so on. In this case, a little previous musical knowledge is imperative to understanding the comedy. Otherwise, it's just another piece of music.

And I almost forgot to mention Spike Jones (and his City Slickers), whose prolific use of unorthodox instruments and noises to make music gave him a lot of work in Warner Bros. cartoons. He was a parodist, perhaps the first, as well as a writer of original funny songs, such as “There's a Fly on My Music” and “Der Führer's Face.” But I digress.

Music has a way of making us feel a certain way, and I think to break down music, you find those harmonies and melodies each evoke something different inside us. A certain chord in a certain song gives us an immediate sense of loneliness, or warmth, or love. Consider the songs you love to listen to—putting aside the words, if there are any, what moments speak to you? Even if you don't know what chords or what or couldn't find a B-flat to save your life, you can probably identify how certain pieces of music feel. I wonder if we all feel similar things when we hear certain things, if music can be a shared emotional experience as well as an auditory one. This is what I'm getting at about the humor of music. If everyone in a room laughs at the same time to a certain chord, there must be something deeper going on.

I was going to leave you with a recording of “The Rich 4 Rag” so you could make your own judgments about what's funny and what's not, but it's been a while since I've played it and it takes a bit of getting used to. So, instead, I leave you with another rag, this one the score for a silent short film. Is the music funny by itself, or does it need the film to be funny? (Or, is it just not funny at all?) Thoughts on this or anything, I'd love to hear from you.

Everyone who has ever taken a music class probably remembers the following: In treble clef, the lines are Every Good Boy Does Fine, and the spaces spell F-A-C-E. In bass clef, the lines are Great Big Dogs Fight Animals, and the spaces are All Cows Eat Grass. As one ventures further into the realm of music-making, one discovers a new clef; a clef that takes the guise of several different note arrangements, depending on where it is placed on the staff. It's this funky guy right here:

If it's centered around the middle line, it's known as an alto clef. If it's around the second line down, it's called a tenor clef. Fun, right? To my knowledge, after much searching, there are no standard mnemonics for these clefs. Therefore, invent!

For alto clef, I suggest you Forget Alto Clef Ever Got made. (That's the lines.) If that ticks the altos off, just remember that Girls of Beauty Delight in Flowers make up the spaces between.

In regards to the tenor, look at his lines and remark about his Dashing F-A-C-E. You can also remind him that Elegant Guys Bathe Daily are the spaces. (Those tenors!)

Have something better than my poor attempts? Do tell!
Posted by Kevin F. Story at 20:47 No comments: